Mars Hydro generously sent me an FC-3000 to test out for my readers – read below for details about the FC series grow lights, plus my experience. 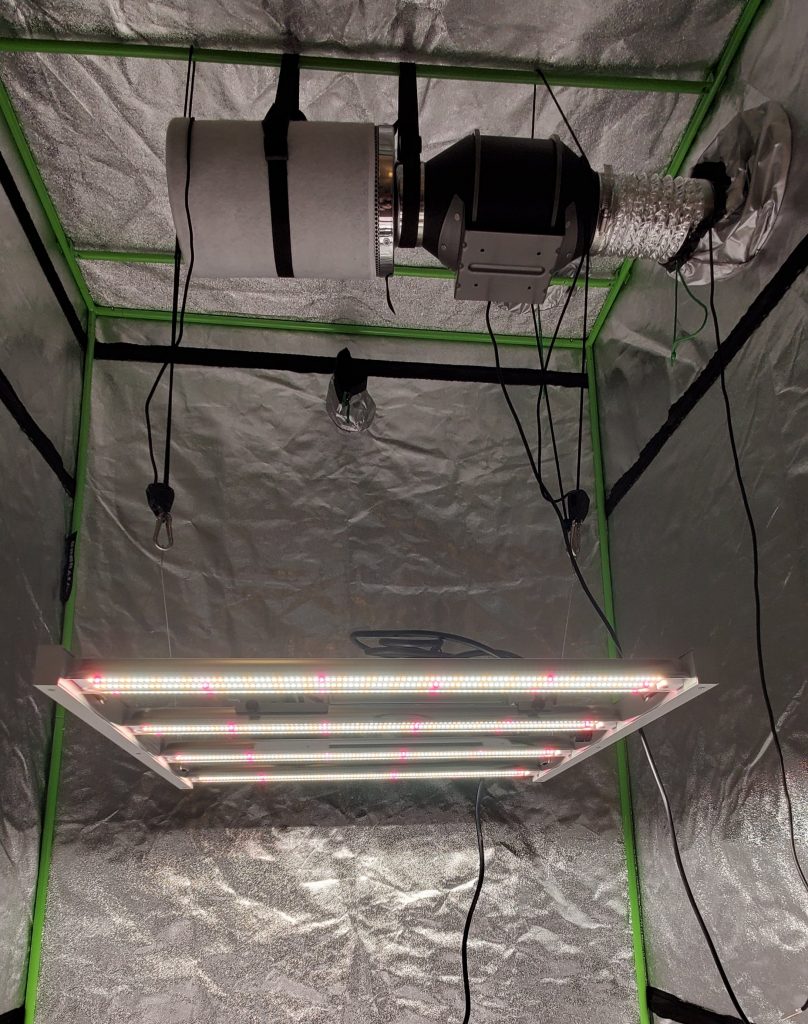 The advantage of bar-style grow lights is a better light spread across the growing area.

Looking at the LEDs used, Mars Hydro added the more premium Samsung LM301Bs, as well as Osram 660nm reds. These are the same LEDs used by HLG and Gavita, although those might use the 301H version which is essentially the same.

If you ask my opinion, I don’t think there’s much difference between the Epistar and Samsung 301Bs. I’ve had good results with both brands, but I also see people who strictly prefer the Samsung brand LEDs.

The LED board is also coated in a clear rubbery substance that makes it IP65 waterproof.

The daisy chain feature is something Mars Hydro recently brought back with the SP-3000 model, and they’ve also carried it over to these new FC grow lights.

With the daisy chain function, you’ll be able to connect the power source of up to 20 FC grow lights with a small cable, instead of running all 20 power cords to an outlet and creating a wire nest.

If you’re using more than one grow light, this is a feature you definitely want at your disposal. One of the best features on Mars Hydro grow lights is the 2 meter long power cord that allows you to detach the driver from the light fixture and hang it 2 meters away outside your grow tent.

This allows growers to manage heat much better since the drivers are one of two heat sources.

Mars Hydro is offering the FC series in four sizes. Even the smallest size offers a pretty decent coverage area. 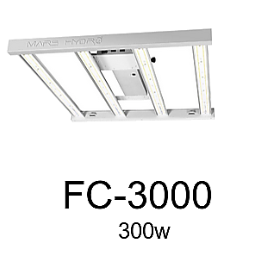 The Mars Hydro FC 3000 is the smallest model. You can flower 3×3 feet and veg 4×4 feet of space with this grow light. If you’re growing autoflowers you’ll have 4×4 feet of coverage for the whole lifecycle because they’re kept at veg light intensity throughout.

The Mars Hydro FC 4800 is the mid-size model in the FC series. You can flower 4×4 feet and veg 5×5 feet with this grow light. If you’re growing autoflowers you’ll have 5×5 feet of coverage for the whole lifecycle due to autoflowers only requiring veg level light intensity. 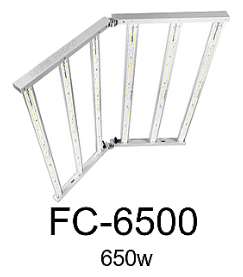 The Mars Hydro FC 6500 is the largest model in the FC series. You can flower 5×5 feet and veg 6×6 feet with this grow light. If you’re growing autoflowers you’ll have 6×6 feet of coverage for the whole lifecycle due to autoflowers only requiring veg level light intensity. The Mars Hydro FC 8000 is the largest model. You can flower 6×6 feet and veg 7×7 feet of space with this grow light. If you’re growing autoflowers you’ll have 7×7 feet of coverage for the whole lifecycle because they’re kept at veg light intensity throughout.

Many growers are probably wondering the difference between the Mars Hydro FC-3000 and FC-E3000, or any of the FC and FC-E model grow lights.

There are three differences:

The first difference is that the FC-E grow lights do not fold in half for easy storage, compared to the slightly more expensive FC grow light version.

The FC-E grow lights also use a different brand MOSO driver, which presumably also contributes to the slight cost savings. While I havent heard much about MOSO, I do know the Bridgelux LEDs have been used in grow lights for a long time and they’re a reputable and reliable brand.

The Mars Hydro FC-E series is a great way to save money and still get a considerable amount of wattage and technology in terms of the grow light design.

As shown in the image above, the spectrum produced by the Mars Hydro FC grow lights is a near perfect combination of blue, red, and white wavelengths.

The light uses 2800K-3000K warm white, 4800-5000K cool white, and 660nm red diodes. My early production FC-3000 did not come with ultraviolet included, but the current FC models include both infrared and ultraviolet LEDs. The FC-E will not include infrared or ultraviolet as mentioned above.

White spectrum has been shown to grow 10-15% better than red and blue (blurple) alone when compared in scientific studies.

If you combine that with some of my other recommendations for maximizing your cannabis yields, you’ll have an incredible harvest every time. 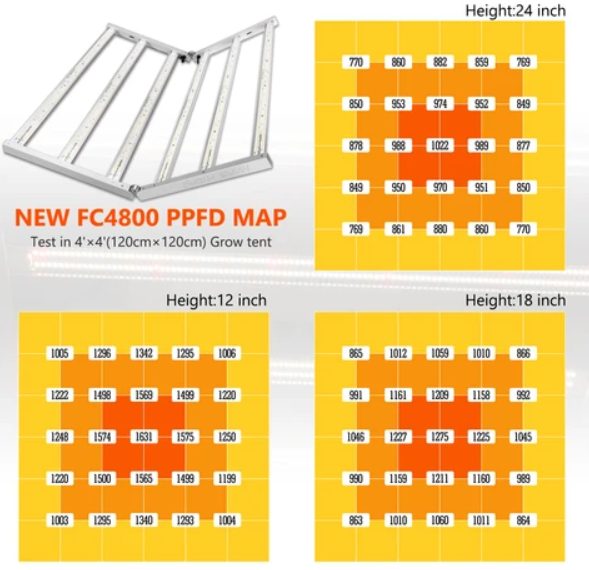 Take a look at the image above and you’ll see the FC series spread light very well across the grow area, a very important factor. Not only is the light spread well, but the intensity released by the FC 4800 in the test above is strong enough to result in maximum yields from your cannabis plants!

In terms of value these grow lights offer incredible performance for the price.

How do the Mars Hydro FC series grow lights stack up to other similar options? Mars Hydro is one of the brands I recommend most due to the convenient separable drivers and daisy chain functionality. The FC Series comes at a slight premium to the flat quantum board style grow lights, but you get better heat dissipation with the bar design, and also better light spread.

If you’re looking at bar style grow lights you should also check out the Spider Farmer SE Series which are a close comparison to the Mars Hydro FC, but you’ll get ultraviolet and infrared diodes with the Spider Farmers.

In terms of cost, the FC 6500 is priced favorably compared to similar 650 watt models from HLG and Gavita, while offering similar performance, the same LEDs, and arguably a few better features like daisy chain and removable driver.

I’ve heard from several growers who were very happy with their TS-3000 so you should decide if the extra cost and power of the FC 4800 is right for you.

The FC 3000 costs a bit more than the Mars Hydro TSW 2000, which has different LEDs, but it consumes the same amount of power and covers the same area.

If you’re on a budget, you may be able to find a more bare-bones grow light such as the Maxsisun grow lights, where you’ll save on cost, but you’ll be sacrificing features like the daisy chain, dimmer, and brand name LEDs. At the end of the day you’ll still be able to grow cannabis though.

If you’ve been considering one of these FC grow lights for your home grow, I think you’re on the right track. Of course there are a ton of other options out there, but Mars Hydro is still offering some of the best value when it comes to features and grow light performance.

Feel free to reach out to me if you have any other questions!

What size space is the Mars Hydro FC grow light for?

Do the Mars Hydro FC Series grow cannabis from seed to harvest?