For people who love to grow indoor plants, there are always continuous debates on the best grow light that gets the best results for growth. One of the most recent debates is the effect of white LED lights on indoor plant growth.

A study at Chiba University measured the effects of supplemental lighting with LEDs on tomato yield, which included white LEDs.¹

Based on the unit photons emitted, the white LEDs showed as high efficiency as the red LEDs in increasing tomato yield, followed by the blue ones.

This is quite an interesting result because not many grow lights include white spectrum, although some of the higher end models have started to include it.

The study found that tomato yields increased 12 to 16% when white LED lights were included with a mix of red and blue lights to grow tomatoes.

Even though the red and blue lights contributed to the result, the study’s authors concluded that “The results were probably due to the white LEDs that contained more than 50% of green light characterized by high penetration into the canopy.”

While most indoor growers are familiar with the benefits of using purple growing lights, white LED lights are a newer consideration.

Almost all growers have previously considered white light to have little or no value for plant growth. However, this is not actually true with white LED Lights, as seen in the studies cited earlier.

The full white light spectrum can be seen in the table below:

Most LED grow light spectrum charts will already show these wavelengths, but the intensity of the wavelengths other than red & blue is weak. Below we linked to a brand of more modern grow lights that includes a full white spectrum, including the all important red and blue as well.

White LED lights are also great lighting to help enjoy the plants as they grow, and they provide a 40% light absorption rate. Additionally, because they are LED, these lights will not burn or over chafe the leaves, ground or soil with a drying light.

What Color LED Is Best For Plants?

While there are a host of different grow lights produced, there has not been enough discussion of the benefits of using white LED grow lights for plants.

With that said, the studies cited above prove that white spectrum LEDs are best for plants.

Traditional high intensity bulb lamps are not as effective because they use more energy and the light released is lower quality. The spectrum produced by HID lamps (HPS and CMH) are usually heavy on red or blue and nothing else.

The use of high intensity bulbs for growing can create a hot environment that’s hard to control. This has often been a significant complaint from indoor plant growers.

Because of this, an increase in plant light analysis was done that included the use of white LED lights. Part of the desire to compare white LED lighting for plant growth came from their low energy use and ability to stay in use for longer periods of time safely.

Based on the studies above, we conclude that more high quality grow lights should include white spectrum. In fact, many are starting to do so.

The Mars Hydro TSW 2000 is a modern, low price range quantum board grow light that has an intense white light spectrum. This light is the best value on the market right now. You can click the image below for more details. 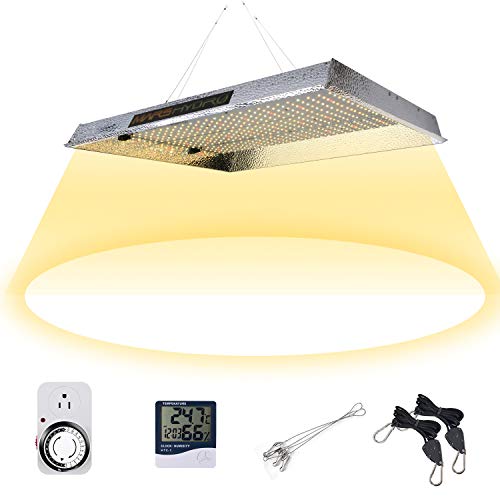 It emits a full white light spectrum (including blue & red) . It’s the most modern LED grow light currently on the market, and will cover a 3’x3′ space with ease. You can click the picture below for more details.

What Are The Best White LED Grow Lights For Small Plants?

The white spectrum LED grow lights above are meant for fruit, vegetables, or cannabis. They cover a 3x3 foot area, and may be overkill for smaller plants such as flowers or succulents growing in a small 1x1 foot area.

If you’re looking for a small white spectrum LED bulb that’ll cover a 1x1 foot area and is sufficient for smaller plants like succulents, flowers or seedlings, I highly recommend the Sansi 40w daylight LED bulb. I have these bulbs at home and wrote an article about my experience with them here.

Since most white LED lights run at a lower light absorption rate, and are not comparable to natural sunlight, the use of red, purple, blue or green LED lights are often used in combination with white lights.

When red and white, purple and white, blue and white or green and white LED lights are used in combination, the outcome of light absorption is much better.

Using white LED lights with other primary color LED lights offer the added benefits of visibility and better room atmosphere. This allows plant growth to occur in any room of a home versus a specified plant room.

In some cases, people have used a combination of red, white and blue LED lights to give the plants their much-needed light combinations while enriching the room with a patriotic glow.

When it comes to indoor plant growing, studies have shown the use of LED lights has been found superior to traditional plant growing lights. Using LED lights significantly reduces energy consumption and does not create overheating or the hazards of higher heat risks from ongoing daily usage.

White or Purple LED grow lights - Which are better?

Are White LED lights good for growing cannabis or other plants? The answer is yes. They play an important role in being one part of the absorbable spectrum, but it’s not enough to fully nurture your plants on its own unless it’s mixed with red and blue spectrum as well.

This is why white spectrum LED grow lights are always mixed in along with other colors. In addition, you still need white LED grow lights as part of a safe grow space. You’ll need them to keep your room safely lit while you let your colored grow lights rest.

Fortunately, you won’t need nearly as many white LED lights for your room. You also won’t need such high intensity ones compared to your cannabis grow lights.

Purple grow lights are still useful for growing plants, but about 10-15% less efficient according to some studies.