The Mars Hydro 300 watt is one of the best cheap LED grow lights for a small space. It’ll emit intense light over a 1 foot by 1 foot space.

Or you can keep Reading Below About The Eco 300w model* 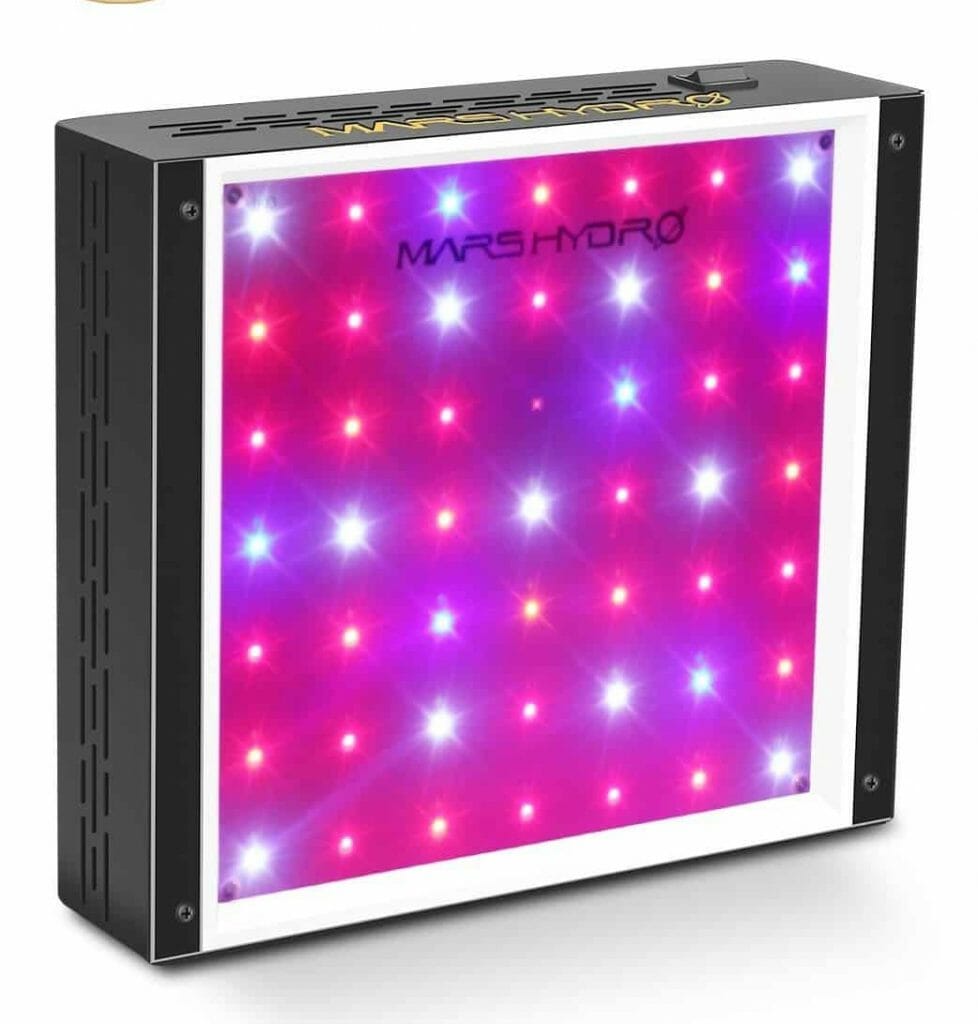 Many people like to know who they’re doing business with. It brings great comfort knowing you’re dealing with an experienced and well established brand that has the capability of providing you a quality product and a good experience.

As far as Mars Hydro is concerned, it’s a highly reliable and trustworthy brand that’s been around for roughly a decade.

Moreover, Mars Hydro has multiple warehouses all around the world including various tier one countries like USA, Canada, UK, Germany, Russia, and Australia.

The Mars Hydro Eco 300 watt model is shown below, above the newer replacement the TS-1000. 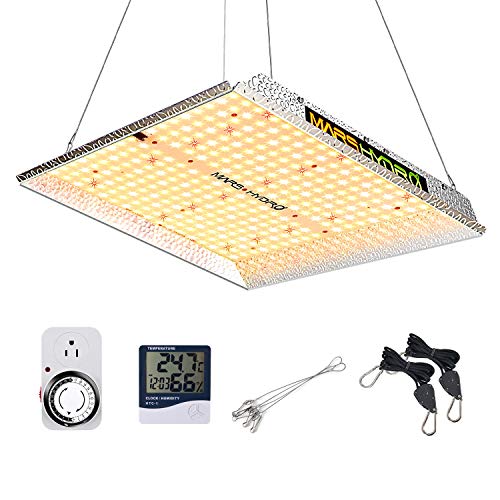 With the Eco 300, Mars Hydro used their experience in the grow light industry to make a few improvements.

One important improvement is power efficiency. More details on that later. Another new improvement was removing the heat sink. That may cause you to gasp at first, but Mars Hydro claims the new fan and cooling slits combined are capable of keeping the grow light cool.

I don’t think Mars Hydro would risk their hard earned reputation by designing their brand new grow lights to overheat.

Mars Hydro also improved the LEDs on the Eco 300. They introduced SMD LED technology, which they claim is up to 3 times brighter than conventional LEDs. There’s also a few additional red LEDs for improved flowering cycle.

With the help of 60 LED chips of 5W each this grow light delivers quality light on a decent grow space.

Mixed LED angles of 90 and 120 degrees increases the penetration rate and makes your plants more healthy and happy.

The Mars Hydro 300 watt LED grow light’s spectrum is sufficient for both growth phases of your cannabis plant’s lifecycle. This light was equipped with a 12 band full light spectrum, including the important infrared band.

A well balanced mixture of red and blue spectrum is contained in this grow light. Take a look at the below image.

If you’re a spectrum lover and believe in highly intense and bright light then nowadays COB Grow Lights are quiet famous for higher intensity. You can check out our top COB LED grow light picks here.

Coverage area is obviously one of the main factors you’ll be considering for this full spectrum LED grow light. The max coverage for the 300 watt Mars Hydro is 2’x2′ – pretty average for a grow light this size and output.

The next factor, PPFD reading is perhaps even more important because you can have a two foot coverage area, but if the light isn’t strong enough to penetrate your plant’s leaves then it’s not helpful to your plant.

Mars Hydro says this light is putting out up to 190 umols at 1.5 square feet from an 18″ hanging distance. Right in the center directly under the grow light, this grow panel can deliver 450 uMol from the height of 18”. Most of the light bands your plant needs can be absorbed below 240 umols and so this reading is sufficient to promote growth for your plants.

If you’re looking to fill a 4x4ft space you’d be better off checking out the larger Mars Hydro TS-3000 model, which is designed for 4x4 feet of coverage. I’ve spoken to owners of this light who are very satisfied with it’s performance in their 4x4 foot tent. I personally own the TSL-2000 which is designed for a 2x4 foot tent, it’s also a great grow light.

More specifically, one Eco 300w grow light would be sufficient for a 1x1 foot space.

This is one of the most neglected factors by the indoor gardeners.

Initially people look at other qualities and neglect power efficiency, but later on they regret it, especially if they’re running multiple lights.

The old version was pulling roughly 135 watts from your outlet. The new version pulls approximately 110 watts. The power draw with most grow lights can fluctuate between 5-10%, and with this grow light Mars Hydro has said fluctuations could be around 5%.

With this low actual power consumption mark, it can still replace an old-fashioned HPS system of 300W with ease.

Overall, this is an 18% improvement on power consumption, and it really starts to add up if you’re daisy chaining multiple lights in your grow space.

Cooling is an essential factor to consider as a precaution before making up your mind for and LED grow light. A heat generating light can break all your dreams and can destroy all your expectations with a single go.

Luckily with this light, its relatively low output doesn’t produce much heat to begin with, so you wouldn’t need to worry as much as you would with a 600 watt or 900 watt grow light.

Cooling and heat dissipation were two aspects that were modified with this newer iteration of Mars Hydro’s 300 watt LED grow light. You may be wondering why Mars Hydro would remove the heat sink at risk of running a hotter light? They’ve been around long enough to know that a 300 watt light drawing 110 watts of electricity isn’t producing that much heat.

With that said, you have one main fan on the back which Mars Hydro says runs at around 49 decibels. That and the cooling slits on the sides of the light are sufficient to keep this grow light cool. We searched around and we’ve yet to see any owners complain about heat with this model.

Mars Hydro provides a generous 3 year warranty for this full spectrum grow light. They have a service facility conveniently located in California, USA.  They also provide a 30 day money back guarantee if you’re unsatisfied with your purchase in any way.

You can get in touch with Mars Hydro’s customer service team directly from their website. They aim for an average response time of 8 hours.

Mars Hydro products use UL and ETL certified standards in its build.

These certifications represent strict North American safety standards that the product must pass in order to be certified.

The UL-certified plug ensures electrical safety of your grow space as well as your grow light.

One essential consideration most shoppers make before purchasing a new item is comparing brand to brand. I’ve noted you won’t need to worry about Mars Hydro as a company, but how does their 300 watt LED grow light stack up against other 300 watt grow lights on the market?

I took a look at Viparspectra’s 300 watt model and found that Mars Hydro’s 300 watt grow light was slightly better on PPFD values and coverage.

We also looked at the MaxiSun 300 watt grow light and found it was also unable to keep up with Mars Hydro’s 300 watt led grow light. Power consumption was approximately 140 watts. PPFD output on the MaxiSun was roughly the same, but they were unable to compete on warranty with only 2 years offered.

Spectrum-wise the Mars Hydro 300 watt grow light emits a balanced combination of red and blue, whereas the Viparspectra’s spectrum leans more to the blue side, which will be more helpful during the vegetative phase but less during the flowering phase.

I can honestly conclude that compared to the closest competitors, the Mars Hydro 300 watt grow light offers strong value.

Here’s one video version of this Mars Hydro 300W Review. Take a look at it.

In case you have a large grow space and limited budget then Mars Hydro TSL-2000 or TS-3000 would be the best bet instead of putting your money on this mars hydro 300W LED Grow Light.

The spectrum is good for the plants full lifecycle, although it contains a bit more red light compared to blue.

This is an entry level grow light only suitable for 1ft x 1ft coverage area. You would need 4 of them in a 4x4 grow tent.

How many plants can I grow with the Mars Hydro 300 watt grow light?

As many as you can fit in the 1x1ft coverage area. One cannabis plant, or a few smaller plants.

How much will the Mars Hydro 300 watt grow light cost on my electric bill?

It depends on many factors. Assuming you pay the average electricity cost in the US of $0.13/kWh, a Mars Hydro 300 watt grow light would theoretically cost you $9.82 for a 6-week vegetative growth phase, and $10.92 for a 10 week flowering phase. Check out my grow light cost calculator to play with the numbers more.