The HLG 550 V2 quantum board is a large, white spectrum, modern design LED grow light that effectively covers a 4 foot by 4 foot grow space. There are several models of the HLG 550 so look out for the model that suits your needs best.

HLG has discontinued the HLG 550, and now sells the HLG 600, HLG 650R, and HLG Scorpions (for vertical/low ceiling). Keep reading below for information about the now discontinued HLG 550.

This is a top-range quantum board LED grow light from Horticulture Lighting Group’s product lineup.

The light has 4 circuit boards, each containing 288 (1,152 total) Samsung LM301B diodes. Samsung is known to produce top-shelf LED quality, so you won’t have to worry if you decide to go with this quantum board grow light. The boards are placed on a larger aluminum panel with a dimmable Meanwell driver on the opposite side.

Since the introduction of the HLG 550 to the grow light market, Horticulture Lighting Group has expanded the 550 series lineup with some slightly different variations of the original HLG 550 seen at the top of the article.

Below I’ll give a quick overview of the R-Spec, B-Spec, and Eco variants to the HLG 550:

The R-Spec is a design upgrade of the 3000k HLG 550 V2, which is now discontinued, although there may be a few 3000k models left for sale online. Everything you’ve read so far also holds true for the R-Spec variant.

The R-Spec still utilizes 1,152 LEDs. The spectrum is 3500k whereas the HLG 550 V2 is offered at 4000k. There’s a little bit extra blue light in the R-Spec diodes. The additional blue spectrum helps mostly during vegetation but it’s also absorbed during flowering. 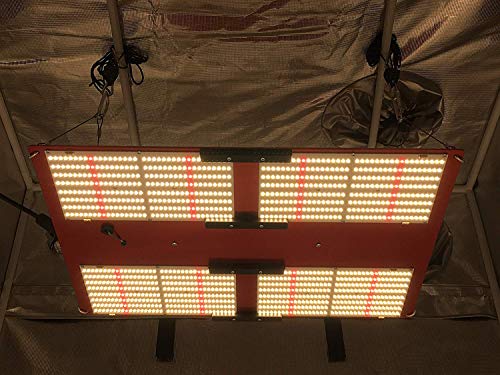 This quantum board grow light is ideal for all growth phases – seedling through harvest. 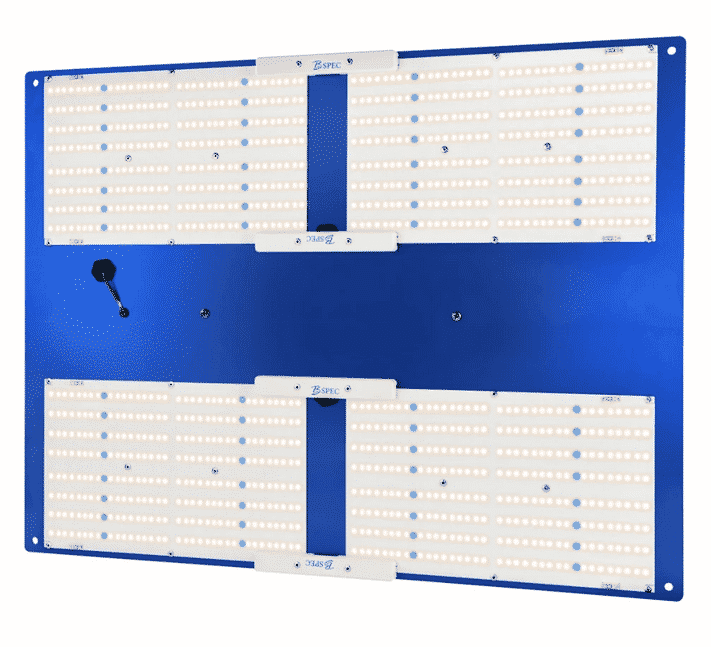 The HLG 550 V2 BSpec is a heavy-blue light variant of the HLG 550 V2. As you can tell by the color, this light is geared for growers maintaining mother plants, seedlings, or clones. Although its not the lowest price Vegetative grow light out (see my list of other great veg lights here), you’ll get the HLG performance that growers know and love.

The specifications are the same as the other two HLG 550 v2 variants, except for the adjustment for extra blue light and less red. The light still utilizes Samsung LM301B diodes and a dimmable Mean Well driver.

As you can see in the image above, the HLG 550 BSpec is heavy on blue wavelengths from 400nm-470nm, and lacks red wavelengths above 660nm.

Can you use the HLG 550 V2 BSpec for all phases of plant growth?

For cannabis or other flowering plants (fruit/vegetables), I would not use the HLG 550 BSpec for all phases of growth due to the lack of red wavelengths. It’s suitable for seedlings and vegetative phases only.

You might choose to purchase this variant if you already have red supplemental lights, or if you’re growing plants that don’t require red wavelengths.

There’s definitely a market for the BSpec grow light. Many people don’t realize just how crucial blue light and the vegetative phase is for a strong and hefty yielding plant.

Jorge Cervantes says in his book, “Unrestricted vegetative growth is key to a healthy harvest.” Strong blue light intensity such as what’s provided in the BSPEC variant can help ensure you have short distances between nodes, instead of a plant that stretches.

The major difference with the HLG 550 V2 Eco grow light is the price difference. I won’t mention exact pricing because it’s subject to occassionally change, but the Eco variant is about two-thirds the price of the other HLG 550 grow lights.

For that sort of discount you may think the HLG 550 v2 Eco grow light sacrifices on the most important specifications, but you’d be wrong. The main money saving difference is the shorter warranty period. The other important factors like light intensity and spectrum are more or less the same.

The Eco variant has two spectrum options – 3000K or 4000K. While you can technically grow from seed to harvest with either option, some retailers recommend only using the 4000K option for veg, and the 3000K for all phases. Lower Kelvin temperatures contain more red light which is better for flowering, while higher kelvin temperatures contain more blue which is better for vegetative growth.

Everything else about the HLG 550 Eco variant is the same as the other variants. It consumes 480 watts, is similarly power efficient, and emits a similar amount of light intensity. I have to admit, the Eco version would now be my first choice if I were considering an HLG grow light for 4x4 feet of space.

How is the HLG 550 V2 different from other LED grow lights? The HLG 550 V2 quantum board LED grow light will draw 480 watts from your wall at maximum power.

The Meanwell driver has a rubber stopper on the “Output” side, you can remove the rubber stopper and adjust the light intensity with a Philips screw driver. You can dim the HLG 550 V2 down by 50%, bringing it down to 240 watts of power consumption.

I suppose it depends which grow light models you compare, but I compared the HLG quantum board LED grow light to 3 very popular non-quantum LED grow lights and the power consumption is almost exactly the same.

The 3000 kelvin spectrum offered on the Eco variant. This spectrum is heavy on red wavelengths and only recommended for flowering. The R-Spec variant features a 3500 kelvin spectrum which is balanced for full cycle growth.

Red and blue are part of the greater white color wavelengths so you’re gaining yellow, orange and green wavelengths compared to purple or blurple grow lights.

This would explain recent the shift of more sophisticated growers to high quality white spectrum grow lights like the HLG grow lights.

If I had to pick between all the spectrum options, I’d go with the 3500K on the R-Spec variant, which is good for full cycle cannabis growth.

To understand better, let’s look at PPFD charts for the HLG 550 V2 quantum board vs regular LED grow lights: 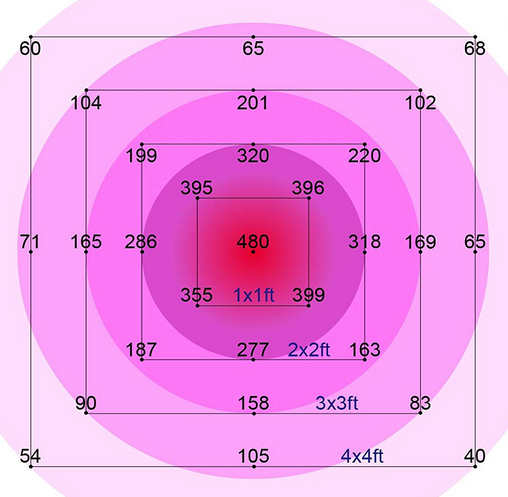 The difference is the Horticulture Lighting Group 550 V2 maintains a considerably higher (and usable) PPFD at the edges, while the first two COB LEDs’ PPFD dropped off considerably when measuring 3 feet from center.

While we’re on the subject of PPFD, the HLG 550 V2 provides sufficient PPFD to get your marijuana (or other) plants from vegetation to flowering. The HLG 550 V2 PPFD chart above contains measurements in an open grow space.

For an open grow space I’d recommend this light for 4 x 4 foot coverage. Inside a grow tent you can get 4 x 4 feet covered comfortably due to the reflection increasing the PPFD.

If you have a larger grow space, like 5x5 feet, you can consider the larger HLG 650R model.

You can also consider two HLG 300 V2 if you want a bit more versatility with light placement.

The HLG 550 V2 doesn’t feature cooling fans or heat sink on the design. That’s because it doesn’t need them. One owner reported their HLG 550 V2 gives off “barely any heat.” Another person said an oscillating fan was enough to manage temperatures while using this quantum board grow light.

Horticulture Lighting Group provides a 3 year warranty with this quantum board grow light, except for the Eco variant which gets one year warranty. Three years is among the more generous duration warranties we typically see with grow lights.

There are a couple dozen reviews combined between Amazon and other reseller websites. A majority of the reviewers are very pleased with the HLG 550 V2.

Aside from the general positive comments, many people commented on the strong brightness of the light. Someone who’s tight on space appreciated the fact they didn’t need to waste space with cooling equipment. Another person said they’ve been running the HLG 550 V2 at full power from seed phase and they’re loving the results. A third person said “buds came out big and dense , and the trichome production under this light was crazy.” Want to save a couple bucks and get a stronger grow light simultaneously? If you’re willing to spend 30 minutes of your time assembling the grow light on your own, I highly recommend the HLG 600H DIY grow light kit.

This is the same 4-panel setup as the HLG 550 v2. It uses the same LEDs and emits the same light spectrum. The only difference is a stronger driver which increases light intensity. This kit consumes 620 watts instead of the 480 consumed by the HLG 550 v2. Assembly is straightforward, and there are assembly videos on YouTube to help you step by step if you need them.

Is the HLG 550 V2 quantum board LED grow light a game changer for growers? It’s different, new, innovative, but the wheel wasn’t necessarily reinvented. You’ll still be able to find some quality COB LED grow lights that put up a fight to these quantum boards.

The HLG 550 V2 BSpec is a heavy blue spectrum variant of the HLG 550 V2 grow light. This grow light is ideal for seedlings and vegetative phase plants.

Horticulture Lighting Group says 15-24″ is the proper hang height for the HLG 550 V2 grow light. You will need to dim the brightness or adjust the height for the seedling phase, but you can utilize full power during the vegetative and flowering phases.

The HLG 550 V2 grow lights are “plug and play.” The only setup required is connecting the hanging kit to the grow light.