I wanted to compare two of the more modern LED grow lights that’re popular among the indoor growing community. Word of mouth from growing forums is enough to convince many people to buy a grow light, but here I’ll lay out the differences between the HLG 550 V2 quantum board LED grow light and the Green Sunshine Electric Sky ES300 LED grow light.

What attracted me to these two lights? They’re both modern and among offer the most value for your buck if you have the ability to shop in this price range. You’ll also each light offers solid coverage that doesn’t fade intensity at the edges. Can these two lights compete for the same buyer? I’d say so.

Before I dig into the comparison, I made a quick comparison table for your convenience:

Horticulture Lighting Group is credited with designing the “quantum board” LED grow light. A quantum board design is simply LEDs spaced evenly in rows on a LED panel. The idea is to spread light more evenly across the canopy.

The company currently offers a product line of quantum boards ranging from the small HLG 65 to the large HLG 550 V2. They also offer DIY quantum board kits if you’d prefer to use their boards to make your own setup.

In contrast to COB LED grow lights and red/blue spectrum LED grow lights, the quantum board has no cooling fans, no intensifying lens, and produces a complete white spectrum. Quantum boards are typically more efficient when considering power usage to light output.

Quantum boards are now one of the most popular options when it comes to LED grow lights. Many people who switched from red/blue spectrum LED grow lights claim to notice a considerable increase in yield.

With that said, growers are migrating more quickly towards Green Sunshine’s lights as word spreads and as people learn more about quality light spectrum from growing cannabis.

I usually provide a bit of background on these companies so people are more confident about the product they’re inquiring about. There are a lot of cheap LED grow lights on the market that simply don’t provide the whole spectrum or level of light intensity that’s needed to maximize your yield. When you get to the higher end companies like Green Sunshine and Horticulture Lighting Group, you really don’t need to worry about that. The four boards are placed on a larger aluminum panel with a Mean Well driver on the back side. The shape of this board is a square. If you already have a square 4×4 grow tent, the HLG 550 v2 may be more suited for you.

The Electric Sky ES300 has a rectangle design, measuring in at 3 feet long by 1 foot wide. The LEDs are aligned in strips, If you have a 2×4 grow tent, this light is likely the better option. The Green Sunshine ES300 has a full body heat sink, and no cooling fans. Just like the HLG 550 doesn’t need cooling fans, neither does the ES300.

Both of these grow lights are dimmable, although personally I don’t think I’d ever want anything less than full power.

Spectrum is one of the most important factors when picking a grow light. With that said, it’s still not a completely settled science, especially when it comes to growing cannabis.

But high end grow light manufacturers like these have been moving away from the basic red/blue spectrum for what they believe are better spectrums. The comparison of these two grow lights’ spectrum are a prime example.

Don’t worry, white spectrum lights actually include blue and red wavelengths, so you aren’t losing those important wavelengths. You’re simply gaining yellow, orange and green wavelengths along with it.

The Green Sunshine company didn’t publish details or a chart of their spectrum at the time of writing this, so I reached out to them. I wanted to know why so many growers swear by this light. 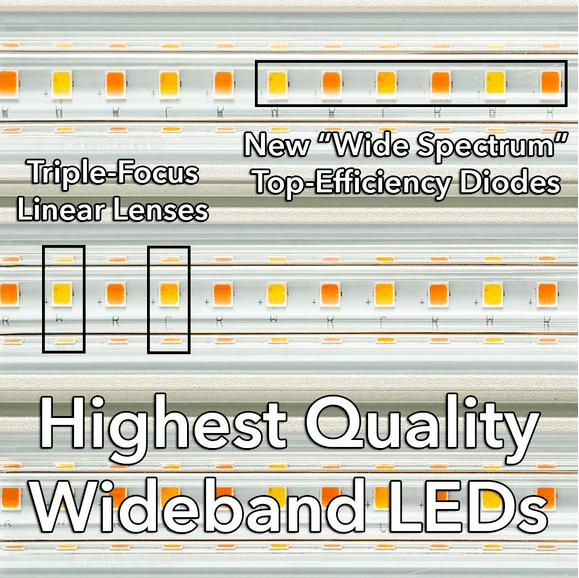 The Green Sunshine ES300 utilizes a proprietary wide spectrum light. They say the wavelengths are 420nm to 800nm, which means this light is heavy on infrared. The color breakdown is as follows: Approximately 10% blue, 25% green, 55% red, and 10% infrared. It’s a highly customized spectrum, far from the ‘typical’ blue + red combo you see on most LED grow lights.

Michigan State University ran an experiment to see how useful the inclusion of green light is for plant growth, compared to other common spectrum makeups. Not only did they find that green light *is* useful in photosynthesis, but the salvia plants grown with a majority Green/Red spectrum similar to the Green Sunshine Electric Sky ES300, actually grew 2nd tallest out of 6 different spectrum combinations.³

The wideband spectrum used in the Electric Sky replicates some of the Sun’s infrared wavelengths for growth power, with a balanced color ratio to instruct plants to grow in a shape that maximizes yield.

With the unique high-dosage of near-infrared light, large flowers initiate sooner, vegetation grows faster, and the plant makes more efficient use of light from what is known as the Emerson Effect…

Not only is Green Sunshine very confident about their spectrum, but perhaps more importantly, the customers who’ve bought their lights swear by them. That definitely caught my attention. You can read more about the customer comments below.

This video is about the smaller model, the ES180, but everything else is the same. A very nice grow light indeed.

Which spectrum is better?

Your light spectrum can be amazing, but if the light isn’t intense enough, good luck growing anything well. I researched and wrote a whole article about the proper PPFD for growing cannabis, but to keep things brief, you want constant 460 uMol during an 18 hour vegetative light cycle, and 925uMol during a 12 hour flowering light cycle.

Here are the PPFD charts for each grow light:

The Green Sunshine ES300’s PPFD is just incredible. Mostly because it’s able to maintain strong intensity even out to the edges of the 4ft coverage area. I think you can likely stretch the coverage on this light to 3×4 feet.

Which light intensity is better?

In comparison, the HLG 550 was not measured inside a tent. So if you’re planning to use the HLG in a grow tent, you can consider that those intensity readings shown above will come in slightly higher, which really makes the HLG a closer competitor to the ES300.

If we’re talking strictly about light intensity for these two grow lights, it’s a very close call. Consider the other characteristics to help tip the scale one way or another.

The HLG 550 v2 is more efficient when it comes to power use. It emits an impressive 2.5uMol per joule of energy consumed. In comparison, the Green Sunshine ES300 emits 2.0 uMol/joule.

The context here is that this has nothing to do with intensity. It simply means how much electric each light is consuming in order to emit 2.5 or 2.0 uMols of light. A reading of 2.0 and better is generally seen on the higher end LED grow lights. You won’t see that on the cheap LED grow lights that cost less.

As for actual watt consumption, the HLG 550 v2 consumes 472 watts from the wall, while your ES300 will only consume an impressively low 300 watts. It seems like the Green Sunshine Company really has their design worked out.

Neither light utilizes a fan. The HLG 550 v2 doesn’t even utilize a heat sink, although the Green Sunshine ES300 does. This is not an instance of the manufacturers being cheap, this is the direction the high end grow light market is headed. These grow lights’ design allows them to dissipate heat effectively without fans.

Alternative Options to These Grow Lights:

The amount of grow lights available to buy is massive. I outline the most important factors to consider in my list of this year’s best LED grow lights.

Both of these options perform just as well, but are offered at a lower price point.

Both of these LED grow lights come with a generous three year warranty. Three years is among the more generous duration warranties we typically see with grow lights.

For the HLG 550 V2, there are dozens of reviews combined between Amazon and other reseller websites. A majority of the reviewers are very pleased with the HLG 550 V2.

Aside from the general positive comments, many people commented on the strong brightness of the light. Someone who’s tight on space appreciated the fact they didn’t need to waste space with cooling equipment. Another person said they’ve been running the HLG 550 V2 at full power from seed phase and they’re loving the results. A third person said “buds came out big and dense , and the trichome production under this light was crazy.”

When I was looking at reviews of verified owners of the Green Sunshine ES300, this one really stood out to me: A grower with 10 years of growing experience said the ES300 resulted in the fastest growth they’ve ever seen. They also complimented the great customer service from the Green Sunshine Company.

There are many other reviews from people who switched from cheaper LED grow light models like Viparspectra or Meizhi. They say the difference is night and day.

These are both really great lights. If I had to pick between the two I’d be tempted to go with the Green Sunshine ES300, simply because the even spread of intense light over the entire canopy is a rare feat. At the same time you’re saving on the price compared to the HLG 550 v2 quantum board as well.

No matter which you pick, both grow lights have very enthusiastic owners so I think you’ll be happy either way.

Does the HLG 550 v2 work for all plant growth phases?

Does the Green Sunshine Electric Sky ES300 work for all plant growth phases?

Yes, The Green Sunshine Company recommends this light for all growth phases. One owner said it saved 1 to 1.5 weeks from his veg period.

The HLG 550 V2 is best for a 3×3 grow space. It’s also sufficient in a 4×4 grow tent due to increased light reflection of the tent.

The Electric Sky ES300 grow light covers a 2 by 4 foot space. It will also be sufficient for a 3×3 grow tent.

What voltage works with the HLG 550 V2 driver?

What voltage works with the Green Sunshine Electric Sky ES300?

With the supplied adapters, the Electric Sky ES300 will automatically operate from a voltage range of 100V to 277V.

18 inches for all growth phases.

How high do I hang the Green Sunshine Electric Sky ES300 grow light? 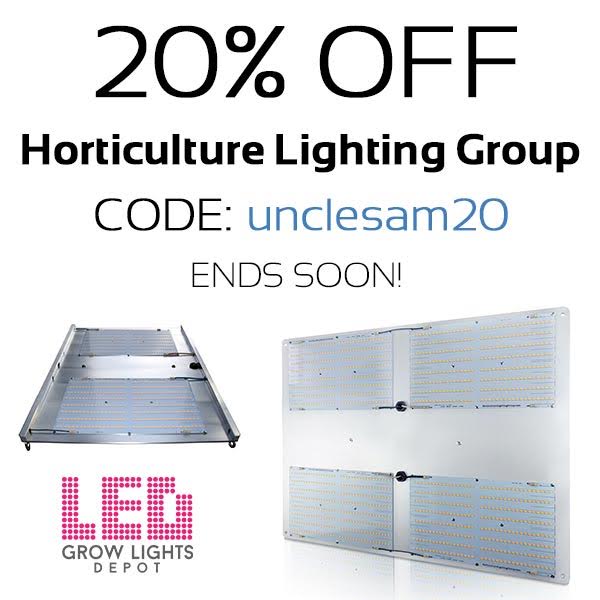