Horticulture Lighting Group actually came up with the “quantum board” grow light design and started the trend among the indoor plant growing community.

In this detailed review we plan to answer all your questions about this grow light.

This is a mid-range quantum board LED grow light from Horticulture Lighting Group’s product lineup.

The light has 2 circuit boards, each containing 288 (576 total) Samsung LM301B diodes. Samsung is known to produce top-shelf LED quality, so you won’t have to worry if you decide to go with this quantum board grow light. The boards are placed on a larger aluminum panel with a dimmable Meanwell driver on the opposite side.

How is the HLG 300 V2 Quantum Board Grow Light different from other LED grow lights? The HLG 300 V2 quantum board LED grow light will draw 285 watts from your wall at maximum power.

The Meanwell driver has a rubber stopper on the “Output” side, you can remove the rubber stopper and adjust the light intensity with a Philips screw driver. You can dim the HLG 300 V2 down by 50%, bringing it down to 120 watts of power consumption.

I suppose it depends which grow light models you compare, but I compared the HLG 300 V2 to 3 very popular non-quantum LED grow lights and the power consumption is almost exactly the same.

Don’t worry, white spectrum lights actually include blue and red wavelengths, so you aren’t losing those wavelengths. You’re simply gaining yellow, orange and green wavelengths along with it. This would explain recent the shift of more sophisticated growers to high quality white spectrum grow lights like the HLG grow lights.

To understand better, let’s look at PPFD charts for the HLG 300 V2 quantum board vs two other COB LED grow lights: 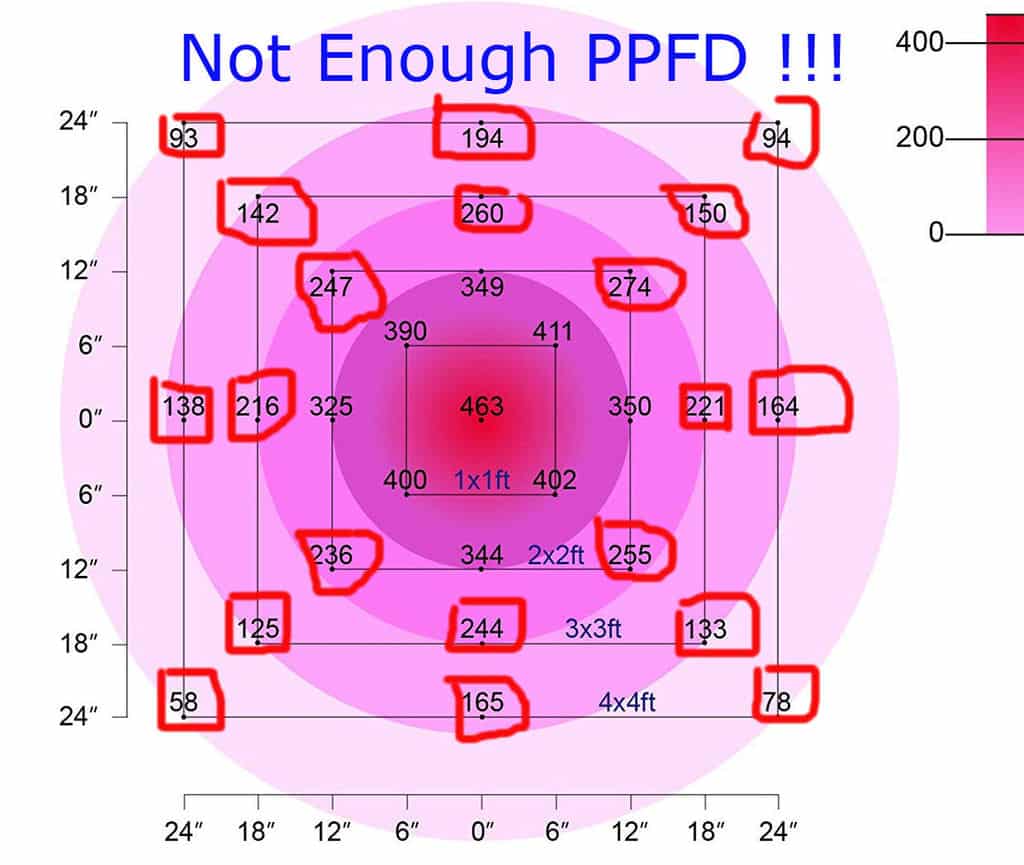 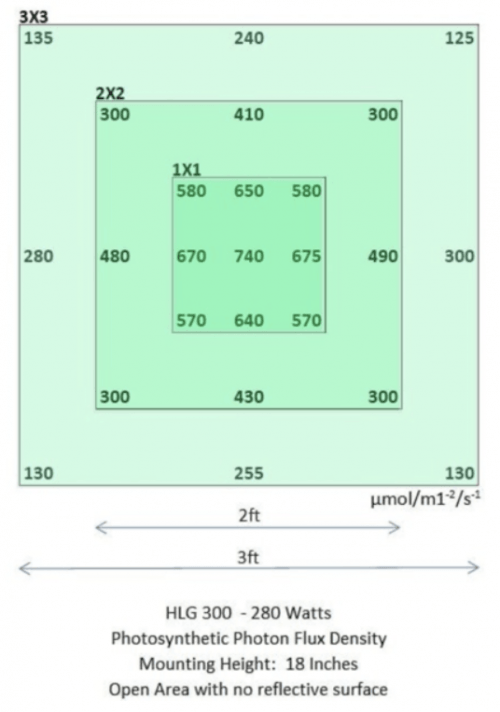 The difference is the Horticulture Lighting Group 300 V2 maintains a considerably higher (and usable intensity) PPFD at the edges, while the first two COB LEDs’ PPFD dropped off considerably when measuring 3 feet from center.

While we’re on the subject of PPFD, the HLG 300 provides sufficient PPFD to get your marijuana (or other) plants from vegetation to flowering. The HLG 300 V2 PPFD chart above contains measurements in an open grow space.

Horticulture Lighting Group also posted PPFD readings from inside a 3x3 grow tent where the readings were considerably stronger. So for an open grow space I’d recommend this light for 2x2 foot coverage. Inside a grow tent you can get 3x3 feet covered comfortably.

You can also consider the HLG 550 V2 if you want stronger light in your 4x4 foot space.

The HLG 300 V2 doesn’t feature cooling fans or heat sink on the design. That’s because it doesn’t need them. One owner reported their HLG 300 V2 doesn’t get hot at all, only gets warm. Another person said they don’t have any circulation beyond normal airflow from a ceiling fan, and the light runs perfectly cool.

Horticulture Lighting Group provides a 3 year warranty with this quantum board grow light. Three years is among the more generous duration warranties we typically see with grow lights.

There are a couple dozen reviews combined between Amazon and other reseller websites. A majority of the reviewers are very pleased with the HLG 300 V2. Aside from the general positive comments, many people commented on the strong brightness of the light. Someone who’s tight on space appreciated the fact they didn’t need to waste space with cooling equipment. Another person said the HLG 300s are more versatile than the larger 550 models, so they’d prefer buying two HLG 300s instead of one HLG 550. 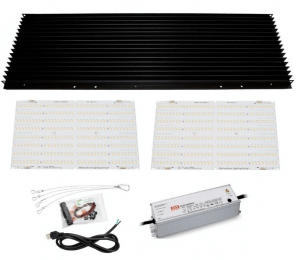 Want to save a couple bucks and get a stronger grow light simultaneously? If you’re willing to spend 30 minutes of your time assembling the grow light on your own, I highly recommend the HLG 260 watt V2 R-Spec DIY kit.

This kit uses the same 2-panels as the HLG 300 v2. It uses the same LEDs and emits the same light spectrum. The only difference is a stronger driver which increases light intensity. This kit consumes 260 watts instead of the 270 consumed by the HLG 300 v2. Assembly is straightforward, and there are assembly videos on YouTube to help you step by step if you need them.

Is the HLG 300 V2 quantum board LED grow light a game changer for growers? A lot of people like it, but it doesn’t necessarily “blow away” regular or COB LEDs grow lights. It’s different, new, innovative, but the wheel wasn’t reinvented.

What Size Grow Space Is The HLG 300 Grow Light Good For?

The HLG 300 grow light is sufficient for a 3x3 foot grow space or grow tent.

What Height Do I Hang The HLG 300 Grow Light?

Every grow light needs to be hung at a different level based on a variety of factors. Read my post on grow light height for more details: Grow Light Height

What Other Grow Lights Compare To The HLG 300?