Bestva released their new quantum board style LED grow lights. The CE Series come in four sizes and offer a nice upgrade from the previous box-y, blurple design. They are a very basic but effective design.

The Bestva CE-1000, CE-2000, CE-3000 and CE-4000 are white spectrum LED grow lights capable of growing plants from seed to harvest. I’ll compare them to other similarly priced LED grow lights so you can get a good idea of how they stack up to competition.

Let’s take a look at the specs on the new Bestva CE Series LED grow lights:

Which Phases of Cannabis Growth are the Bestva CE Series Grow Lights Good For?

Based on the specifications provided by Bestva, you can use these grow lights to grow your cannabis from seed to harvest.

The Bestva CE Series grow lights meet those light intensity requirements. All models will grow well during the vegetative phase, and decent yields during flowering.

If you want a grow light with stronger intensity for flowering, consider my up to date list of the best LED grow lights for cannabis. It’ll likely cost you more than Viparspectra though. 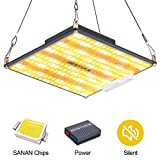 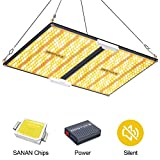 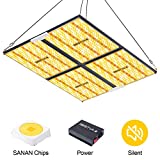 You can see they all look the similar, but the different variants are meant to cover different size grow spaces. 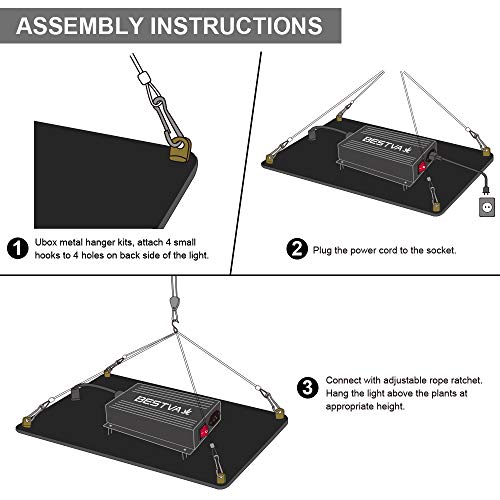 All models include a driver and a power switch. These grow lights pull between 100 and 440 watts of electricity depending which size you choose. These grow lights are designed to cool passively, but there is no heat sink like some other models.

These grow lights use SANAN LEDs, SAN’AN Optoelectronics has been in business for a long time and makes high quality LED chips.

The light spectrum on the Bestva CE Series grow lights is a mixture of white and far red. White spectrum actually contains red and blue wavelengths within, so it’s suitable for all phases of plant growth.

Some companies choose to add additional red LEDs to help with flowering. Bestva even included infrared (730nm) wavelength, which can help a plant fight against diseases and grow thicker and larger.

Bestva’s older models inclued ultraviolet LEDs which I really liked because it’s good for cannabis growing and it’s a rare feature on grow lights. They removed it from this updated version so that’s a bit disappointing.

The white color spectrum consists of 5800K, which is close to the color of sunlight. These lights also include 3500K which is a red-blue balanced white spectrum that’s good for all phases of growth.

Even though the kelvin temperatures vary slightly between brands, it’s not a huge difference as long as it’s more or less balanced. You can do that with all different kelvin combinations.

Based on the intensity of the Bestva CE grow lights, you can hang them at the following heights:

The smaller size Bestva CE-1000 is pretty similar to competitor grow lights, but you can’t dim it, which is a very basic feature I would expect to be included.

Dimming capability is nice to have but you can still go without it as long as you have room to hang your light a few inches higher. I do like that Bestva at least included infrared LEDs.

Other than that, the CE-1000 is similar to other grow lights that cover 2×2 feet in almost every way. Some similar competitors would be the Spider Farmer SF-1000 or the Viparspectra P1000.

My reasoning is because the Mars TSL-2000 is a longer design and uses more power for a similar price. The longer design helps it spread light better to the sides of your 2×4 grow tent. You can also remove the drivers from the TSL-2000 and hang them outside your tent.

The Bestva CE-3000 would be similar to the Viparspectra P2500. You’ll need to decide between infrared on the Bestva and dimming capability on the Viparspectra. Other than that I’d say they’re pretty close.

Overall, the newly designed Bestva CE Series are not bad. But they leave a bit to be desired. My main disappointment is that you can’t dim them.

Other than that, Bestva has been around for a long time and you should be comfortable that you’re getting a good quality grow light.

If you choose one of these grow lights you’ll definitely be able to grow your cannabis without issue through all growth phases.

What height do I hang the Bestva CE Series Grow Lights?

What size grow space will the Bestva CE Series cover?

Depending which Bestva grow light model you choose, you can cover between 2×2 feet and 4×4 feet.